Apollo 66 are a 4-piece based in Washington, DC/Silver Spring, MD. They recently released their second EP, "We Could Be Gone," in September 2022.

Born of the local garage rock scene, they have released a number of bootleg style recordings of their live shows on Bandcamp and released their first self-titled 5-song EP in early 2021. While at their core, they remain a garage rock band, their song writing has evolved with influences ranging from the Beatles to the Cramps. They have performed at a number nightclubs in the MidAtlantic and outdoor venues including Fort Reno Park in Washington, DC in 2017, HampdenFest (Baltimore, MD) in 2019  and most recently Honfest (Baltimore, MD) in 2022.

Apollo 66 hosts a monthly garage punk rock night with other local and touring bands in Silver Spring, MD. Their music has been featured on college, internet, and community radio stations in the Washington, DC area, New York, California, Massachusetts, and Florida, among other places. In April 2021 they performed and recorded a live 4-song set for The Rodent Hour sessions with Matt Attack on Radio Free Brooklyn (New York).

We Could Be Gone

“Your band is fucking awesome!… I like what they do a lot. … It’s good stuff. You should go to their bandcamp and buy their music because it’s worth your time and money. True story.” - Dan Lansing

“What delicious slash and burn punk rock it was." " I definitely appreciate the little drum solos in that song and it made me want to do some air drumming." "This 5 song release is fun and fierce and that's just how I like em." "Yeah, buy that now.” - Tony Perreco 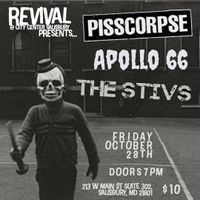 A showcase of some of the most talented bands the east coast has to offer! Pisscorpse, Apollo 66, The Stivs